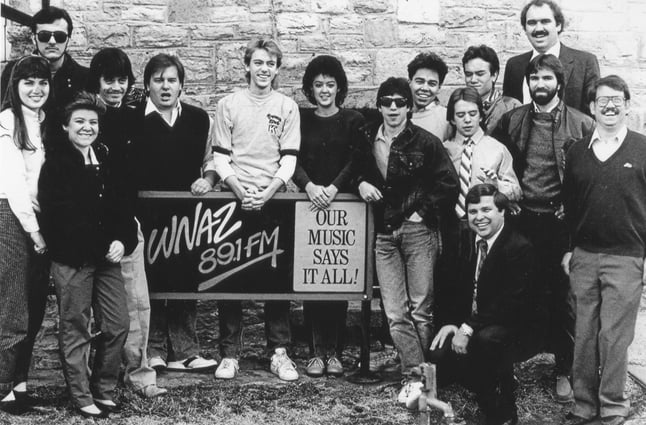 Although Trevecca Nazarene University might be the place many of us grew up hearing about from our parents or other members of our families, there’s still so much that we don’t know about the place that is now our home.

In this blog series, we dive back into Trevecca’s archives and we uncover some of the lesser known things about Trevecca’s past and its culture.

We all know the Tidwell Building. We might have had to meet a professor there or have walked by it on our way to class. What we don’t know is that Tidwell used to be the home of Trevecca's very own radio station, WNAZ.

WNAZ broadcast Christian music, Sunday church services and athletic events for the student body and throughout the Nashville area.

Trevecca’s Board of Trustees first approved WNAZ in 1966, but operations didn’t actually begin until the following year on May 24, 1967. WNAZ was licensed as an educational FM station in August of that same year. Although it began as a small 10-watt station, WNAZ eventually grew into a 1000 watt station.

The radio station’s establishment was a big project that unified faculty members and students alike to bring the dream to reality. Two communications professors—Harry Russell and Bonifacio Fraustro—nurtured the project, which was supported by the entire communications department. The 1967 Speech Club helped to establish the radio station, and the student council was instrumental in several projects that provided new radio equipment.

WNAZ gave broadcasting students real studio experience, and the student managers also received valuable help from friendly neighboring stations such as WSM and ABC News Line. David Deese, assistant professor emeritus of broadcasting and communication at Trevecca, began working with the station as a student manager and remained actively involved with the station until it closed. Deese retired from the University in 2013.

The University shuttered the station in 2010. With the broadcasting field shifting to the internet and knowing the cost of upgrading the equipment, Trevecca sold the radio station to Bott Radio Network, and WNAZ faded from the airwaves.