From the Archives: Trevecca’s Student Publications

For decades, Trevecca has been producing two major student publications, TrevEchoes and Darda. 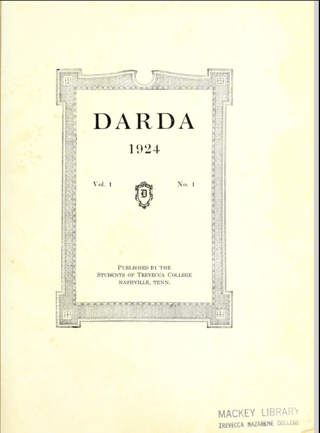 According to a Trevecca history, A Vine of God’s Own Planting, The Darda is the official yearbook of the University and has been published since 1924, except for several years during the Great Depression. If you take a look at the first volume of Darda, you will see that it is dedicated to J.O. McClurkan, “the beloved founder, who caught the vision of humanity’s physical, mental, and spiritual needs.”

The first volume also references the name of the publication, Darda, meaning “Pearl of knowledge.” It says, “When Samuel attempted to describe the wisdom of Solomon, the nearest approach he made was to say that he was wiser than Darda, which means ‘Pearl of knowledge.’ We christen our new annual the DARDA—not because it is a masterpiece, for it is not even a literary production; it is merely a tangible and material record of the lights and shadows of a year spent at Trevecca.”

The 1924 Darda was published “by the students at Trevecca College.” It features brief histories of each class, a class poem, various drawings, a calendar for the year, and ads from local businesses at that time. It has only 82 pages.

Over the years, the yearbook has progressed. It is now created using an online program and designed by a staff of several undergraduate students. Each volume of Darda is printed in full-color, with 180 pages, including student and faculty portraits, feature stories, and sections for university life, spiritual life, student organizations and athletics. The 2017 Darda will be Volume 93 of the yearbook. 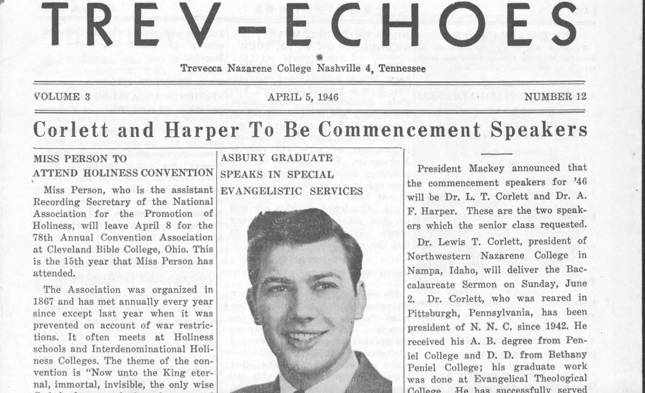 The TrevEchoes, the official student newspaper at Trevecca, was first published on a mimeograph machine in 1944. Howard Wall was the first editor.

Much like the first issue of Darda, the newspaper started small. The first issue, published on Dec. 15, 1944, featured poems, personals and notices of events on campus. Among these, the staff also included a snow warning for Florida students, letters to Santa Claus and prayer requests. Later, the publication became much more journalistic, with full-length articles and photos.

Since that year, the newspaper has been providing those on campus with relevant news, information, and notices. In Mildred Wynkoop’s book, The Trevecca Story: 75 Years of Christian Service, Wynkoop reported that the TrevEchoes was taken over by the student body to “reflect the current thought and life of the college.” In 1968, the student newspaper was rated second best among Nashville’s seven school newspapers, by the Nashville Collegiate Editor’s round-table.

Today, TrevEchoes publishes monthly issues, complete with several news and feature stories. The newspaper is free, distributed all over campus, and available to anyone. TrevEchoes Online is the online student newspaper.

Both Darda and TrevEchoes are digitized and available on Trevecca’s Internet Archive to read online.