From the Archives: Chapel 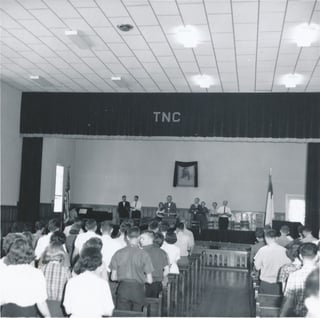 Chapel is a large part of the Trevecca experience, with services twice, sometimes three times a week throughout the University’s history.

In Trevecca Folklore and Tradition, a Trevecca history, author Homer J. Adams said, “Regular chapel services are the major times when the entire college community comes together to enjoy fellowship, to learn, and to worship.”

Chapel has been a part of Trevecca’s Christian education since the school opened.

Former president Homer J. Adams was a proponent of chapel.

“Chapel services constituted a rich experience for faculty and students alike. In chapel, biblical truths were learned, inspiration was gained, students prayed their way to victory at an altar always open, and indoctrination in moral and ethical truth was accomplished,” Adams said.

For a long time, chapel was held in Benson Auditorium in the McClurkan building, built in 1943. Over time, chapel has also been held in the sanctuary of Trevecca Community Church and is now held in the Boone Convocation Center. 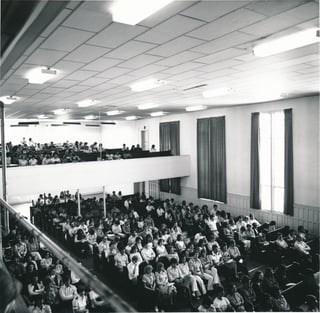 There was a time when there were noonday prayer meetings following chapel services, which used to be held in the room behind the balcony on the second floor of McClurkan.

Trevecca Folklore and Tradition says, “Students prayed with burden and fervor, delaying their lunch until they felt they had ‘prayed through.’ Great things were wrought by prayer.”

Students were once seated alphabetically within the section assigned to their classes. Apparently, lasting social relationships often resulted when students were assigned to sit next to each other.

Congregational singing has been prevalent in Trevecca’s chapel services for a while. It was noted that the purchase of a new electric organ for chapel was the main interest of the senior class of 1945. In the past, there have been revival week services, similar to what we now call Spiritual Deepening week.

Currently, we host chapel services on Tuesday and Thursday mornings at 9:30 and every other Monday evening. Each chapel counts for 1 credit. Students are required to get 24 credits each semester.