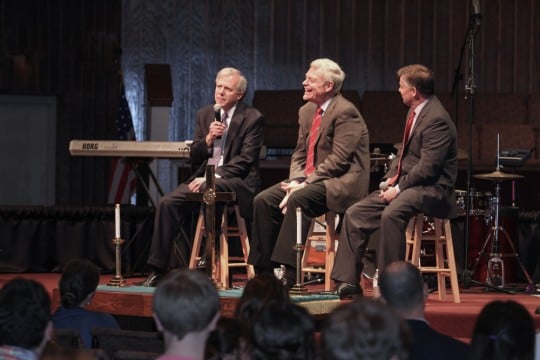 “I feel while walking on this campus, when you invited me here so recently, that you get it. You understand it. You feel it, unapologetically. No bragging to it. It is just what you do. It is just part of why God put you here.

"As you moved around the city, I think each time you have said, 'Here we are, Lord, and what are we called to do?' Actually you’ve told us. I see that here. I see it here, truthfully, in a unique way.

"So many other universities and places of higher education have found themselves inward looking, historically. I think there is more of a movement because you are insistent; because this generation of young people believes in a way that is more universal than ever before in our history that there is not just an obligation but an interest, a duty and desire for public service or community service.

"The numbers when we poll your generation are higher than they have ever been. There is no other group of young people who have ever felt as strongly as you do about this, and the great thing is that you convey it to us.

"As I thought about this, I knew you were here. I felt the importance of it. But it is only now, truthfully, and looking backward, that I understand not only how important what you are doing is, but how much of a model you are for everybody else.”