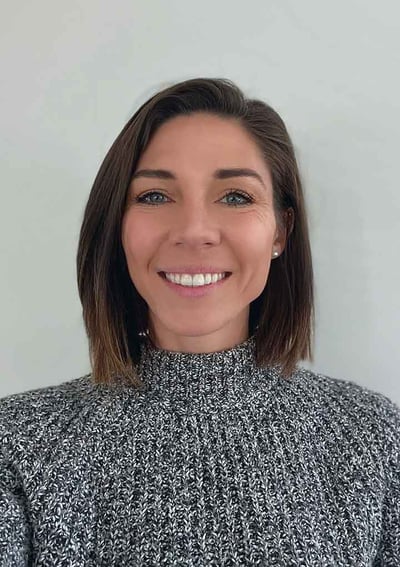 Rachel Hodge’s passion for counseling is rooted in her own experience of international adoption. She was adopted from Ukraine just before her eighth birthday.

“In Ukraine, I spoke a different language and I was raised in a different denomination,” Hodge said. “That all changed when I came to the U.S., so it was traumatizing on a lot of levels.”

Having a counselor was key in helping her acclimate to a new culture and process the many changes she was experiencing.

After spending some time in college, pursuing a global politics major and then transferring during her senior year, she dropped out. In the job where ended up, she’d often find her work to be unfulfilling. Years later, during the pandemic, she was asked a question that set her on the path to pursue her true calling.

“During COVID, I started dating someone who asked ‘if you could go back to school and finish, what would you be doing right now?’ Said Hodge. “I said ‘I always thought I would end up being a counselor,’ and he said ‘why don’t you do it?’”

She began looking into it and settled on Trevecca’s psychology degree-completion program, believing psychology would best equip her to counsel families and adoptees.

“I chose Trevecca because they offered a targeted degree instead of just a general bachelor’s completion degree,” Hodge said. “Having a degree in psychology really set me up to do what I felt would be most fulfilling.”

After years of being out of college, she had some reservations about jumping back into the world of academia, but the program’s flexibility made it a very straightforward transition.

“I was super anxious about the idea of going back, but Trevecca made it so easy. You don’t have to take all your classes at once, you can take your time and narrow your focus,” Hodge said. “You’re not trying to balance the craziness of life and work with your schooling. The workload was super manageable.”

Hodge, who will graduate in May, was also surprised by the faculty, who demonstrated consistent support as students navigated the challenges of deadlines, assignments and picking back up an education that may have begun many years earlier.

“When the professors say ‘we’re here for you,’ trust them. Through every single class, I have never had one that made me doubt that commitment on their part,” Hodge said. “That made the difference for me. This is coming from someone who has been to three different private schools that all claim the same amount of integrity and degree of involvement.”

Her interest in counseling and her methodology are heavily impacted by her faith, and she intends to become a part of the Association of Certified Biblical Counselors upon graduation. She appreciates the emphasis Trevecca places on a faith-based perspective and the freedom to incorporate those views into her work.

“Biblical counseling relies more on theology and spiritual development. So you understand your position in Christ and how that impacts your outlook on yourself and your situation,” Hodge said. “The most impactful class I had was Integration of Psychology and Christianity, because it really pointed out the difference between the two and the limitation of psychology. I was able to submit my assignments with a personal worldview that was respected and accepted.”

She hopes to use her biblical perspective and psychology degree to open her own practice and help families and adoptees adjust and, ultimately, thrive.

“I intend to establish a private practice so I can specifically focus on international adoption advocacy and do it in a pro bono fashion. Counseling is extremely expensive but it is absolutely necessary,” Hodge said.

The Bachelor of Arts in psychology is a degree-completion program that provides a professional level of psychological understanding and Christian ethics that can be applied in a variety of different environments. Graduates learn to apply theories of human behavior to real-life situations pertaining to individuals and dynamics within relationships, families, communities and organizations.