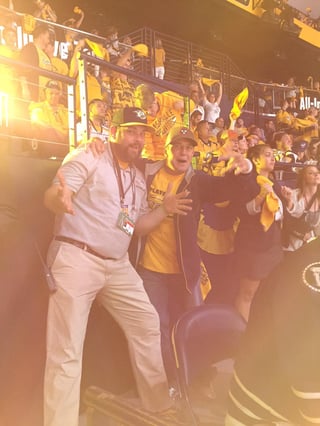 As we count down the hours until the puck drops tonight for Game 6, Trevecca alumni Chris Mercado, ’02, and Keith Orser, ’01, are already doing their best to keep the energy up and bring home the Stanley Cup.

“If we can come home, and win the Stanley cup … That would be the biggest thing in Nashville ever!” Mercado said. “And I get to be on the ice with them. It’s big, you have to sit back and take a breather and be like 'Wow, I’m really here. I get to be here, and Trevecca opened the door.’”

Not too long ago Mercado and Orser were playing baseball at Trevecca, making memories on the field while working to earn their degrees.

Today, Mercado and Orser are still working together and making memories, but this time on the ice.

“I interned with the Preds when I was at Trevecca in the 2001-2002 season,” Mercado said. “Now I’m game night lead of promotions … it’s been incredible.”

After graduation, Mercado continued working with the Preds and has been there for 15 years. He says that this season has been one of the most thrilling of his career.

“It’s breathtaking. To see where we’ve come from. How we worked our way all the way up and it's so worth it, it’s huge,” Mercado said. “I’ve never heard the crowd so loud, and I’ve got a headset on. Somebody’s in my ear, and I can’t hear that guy. It’s pretty loud.”

Game nights are busy for the game ops team. Members are involved in helping fans on to the ice for fan games to planning promotions and escorting the anthem singers out. Basically, Mercado says his team is in charge of bringing everyone on and off the ice. 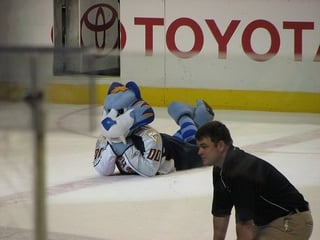 “It’s all about timing,” Mercado said.

In the 2006-2007 season, Orser joined Mercado in the arena, and has been a part of the game ops team ever since, helping with intermissions, TV time-outs and different areas of on-ice entertainment.

“I got [Keith] involved in 2006, and he’s been with the team ever since in game ops,” Mercado said. “It’s cool to have him there, we get to basically go through this together every year, and it’s been fun to have a buddy there.”

Both Mercado and Orser agree that this year has been one that will always stand out to them.

“The Stanley Cup run has been the most exciting, just the way the city has rallied around the team and the excitement around the city,” Orser said. “Just the excitement as soon as you step outside of the building, the plaza parties, the block parties …. You go around town, and you see Preds stuff everywhere. It’s been absolutely incredible.”

With the team so close to the Stanley Cup, Orser looked back on some of his favorite moments from the season.

“When we clinched game 6 of the Anaheim series, the atmosphere in the arena was like nothing I’ve ever experienced before,” Orser said. “It’s been incredible just to experience this whole thing.”

Mercado has also had his favorite moments from helping celebrities on the ice to dancing with Gnash.

“I’ve been there 15 years. I’ve been there when we couldn’t give away tickets and now I’m here for the Stanley Cup,” Mercado said. “It’s pretty cool to see how the city’s changed and how they jump on the bandwagon and all love for the team.”

While Mercado and Orser have gotten to experience some of the Preds' biggest moments on the ice together, Orser says getting to work with his friend has been one of the best parts.

“[My favorite part] has been working with Chris Mercado and getting the chance to continue the friendship,” he said.

With Game 6 happening at Bridgestone Arena tonight, both men are gearing up for the excitement, while also thinking back on the path that got them from the field to the ice.

“Trevecca got me with the Preds,” Mercado said. “If they had never suggested interning with the Preds, I never would have done it. I had no idea about hockey, how the game was played, much less how to read all the names of the players. It opened the door for me, and I’m grateful for that.”