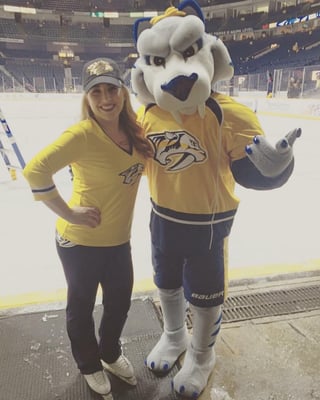 As the excitement around the Stanley Cup grows, so does the energy of the fans, and that makes Demetri Moon’s job as part of the Predator’s Energy Team even more thrilling.

“It’s been unreal. Absolutely unreal,” Moon said, talking about the Pred’s exciting post-season as they battle for the Stanley Cup. “We were talking about it in the locker room the other day, that it’s just been amazing to hear how big of a fan base we have. The Preds are just the team of Nashville now.”

Moon, a 2011 Trevecca graduate, has been an ice girl for two seasons and says that this season has been the most thrilling yet.

“Going out and shoveling when the crowd is chanting, it’s instant chills to hear,” Moon said. “That with all the lights and the fans screaming and waving rally towels—I love that.”

This season has been intense for Moon. As the Preds move closer to the Stanley Cup with each win, she says the energy from Nashville only grows.

“We’re all about getting the crowd pumped up and keeping it lively … During the regular season, the ice girls go out and shovel the ice, and we go out and do tricks and throw T-shirts,” Moon explained. “During play offs we just shovel the ice, we don’t mess with the ice or anything. But the energy is still unreal.”

Previously a competitive skater, Moon loves the opportunity to be back on the ice, but also the chance to be involved with the community of Nashville. From photo booths at the CMA fest to visits to Vanderbilt’s Monroe Carrell Jr. Children’s Hospital to teaching inner city children hockey and dance, Moon gets a chance to give back to the fans and represent the Preds all over Music City.

“We’re kind of the face of the organization, because people don’t always get to meet the players,” Moon said.

When it comes to her time with the Preds, Moon knows quickly what her favorite memory has been. 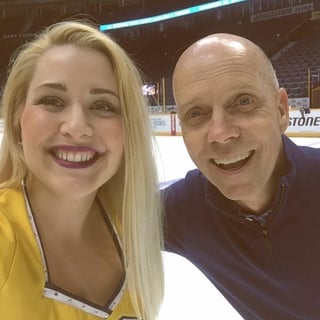 “I have two kids, and I coach for the Scott Hamilton Skating Academy, and Scott Hamilton brings kids out on the ice twice a year. My kids got to come out and skate on the ice with me one night at a Preds game … that was really neat,” she said.

In looking toward the final games of the season, Moon also took a moment to look back on her time with Trevecca.

“Trevcca is where I grew,” Moon said. “Michael Jackson, Michael Johnson, Greg Ruff, the music department – they all gave me so many opportunities and really supported me. Trevecca is my heart … I am very blessed to be a Trevecca graduate, and I take pride in that.”

With Game 5 happening tonight in Pittsburgh, Moon is already excited about getting into the arena and energizing the crowd for Game 6 on Sunday.

“We’re kind of the pump up, like ‘Let’s get these boys excited to win!”’ Moon said.

For Moon, being a part of the Preds organization is more than just a fun job; it’s been an opportunity that’s shaped her life.

“It’s an honor to be on the team,” she said. “We’ve all been blessed with a lot of opportunities … it’s a blessing to be a part of it. And we’re pumped!”

The puck drops for Game 5 in Pittsburgh tonight at 7 p.m.