Names on the Wall: Austin Bush

This is the final post in our series leading up to the dedication of Trevecca’s new music building, the Jackson Center for Music and Worship Arts, which happens today at 3:30 p.m. Each post highlights Trevecca music alumni who have signed the wall in Wakefield after completing their senior recital.

During his time at Trevecca, Bush has specialized in studying jazz, primarily jazz fusion, which draws from jazz harmony and stylistic tendencies from rock, gospel and various cultures.

“After a few years I tried out for our church's Sunday service band which uses professional musicians who travel the country and world regularly with rock, country and Christian pop groups,” said Bush.

Bush made it into his church’s Sunday rotation, something he considers a big deal as he was playing with professionals like Roy Vogt, bass professor at Belmont, Steve Forrest, musician for the Wooten Brothers, Lee Ann Womack, and more.

During his freshman year, Bush received a call from Joe Robinson’s tour manager. Robinson was the winner of “Australia’s Got Talent” in 2008.

“He wanted to know if I'd be willing to go on tour with Joe on his upcoming tour,” Bush said. “Doing so would mean dropping out of school. Through much prayer and advice from my mentors Steve Forrest and Jeff Cox, I decided to stay in school.”

For the next few years, Bush spent his time networking at Trevecca, getting gigs with students and local churches, playing for Trojan Idol, and playing bass for the PR group Awaken. 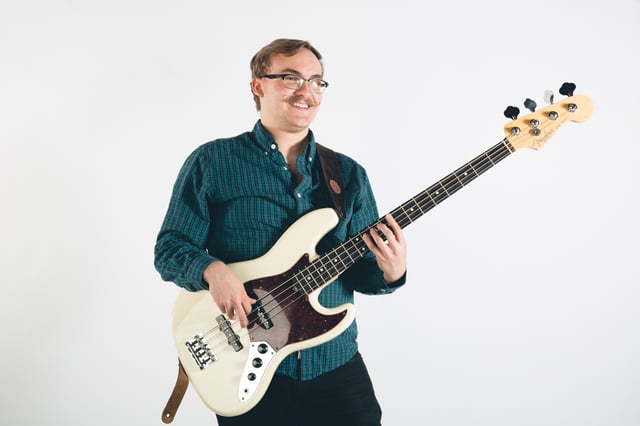 “This year I've decided to sit out on a lot of gigs to focus on my senior performance,” Bush said.

Bush believes that his time in Trevecca’s music program has been influential to his future career.

“My time studying under Jeff Cox has challenged me in ways I never knew possible. He lights fires underneath me when I need to be pushed, and he is also very compassionate and has provided godly wisdom when I needed it,” Bush said. “My experience with studying under Jeff has defined how I view punctuality, preparedness, the role of my instrument in the band setting, my attitude on and off stage and my willingness to be professional in everything I do. If it weren't for Jeff, I would have had a very different college experience.”

As a professor of music, Cox sees Bush as a very focused and talented musician.

“Not only has his time at Trevecca been an enriching time for him musically, but I have seen tremendous growth in his maturity, professionalism and consideration for his colleagues,” Cox said. “I expect big things from Austin Bush.”

Bush looks forward to graduating from the program and signing the wall in Wakefield next to all of his friends that have made an impact on him and how he approaches music.

“On the Wakefield wall on the bottom row you'll see the names Spencer Stevens, Cory Williams, Sam Jennings, Jared Chontos, Caleb Dinger and Chauncey Arner,” Bush said. “My name will be by theirs because of the beautiful music we were all able to make together. Being able to leave a legacy on that wall that in a small way eternalizes all of the good music we made together is really special to me.”

Upon graduation, Bush hopes to have a graduate assistantship at Belmont or MTSU and get his masters in jazz performance.