Names on the Walls: Lenny Walker 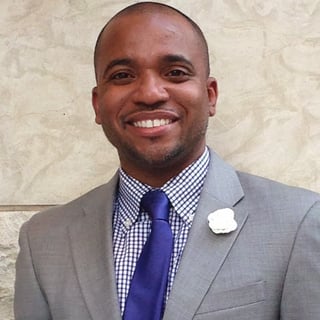 One of the many names inscribed on “The Wall,” Walker’s name was added after his senior recital in 1997. It’s been a Trevecca Department of Music tradition to sign the wall after their senior recitals since 1971.

Walker has a clear memory of signing The Wall. He recalls feeling excited, but also a little apprehensive about the future as he added his name to the collection.

“It was great and different,” Walker said. “I was so glad to be done with it, but graduating and figuring out what to do next was kind of different, you know.”

After graduation, Walker worked in music business with Brentwood Benson for about five years. Then, wanting a change, he moved to New York City to try working in music business there. Walker eventually began working with his church, the Brooklyn Tabernacle.

Walker currently works as a programing director of a documentary film company in New York City, but still uses the skills he learned while earning his degree at Trevecca to help his church’s choir. He gives thanks to Trevecca because he believes that the university prepared him well for his career.

“Trevecca taught me the value of hard work, that if you’re going to be good at whatever instrument or whatever you’re going to do, that you have to put in the hours and have to focus,” Walker said.

Walker says he’s grateful for the lessons he learned at Trevecca. One of the most important lessons, he says, was how to treat others and have an open mind, something he practices in his work environment every day.

“I talk to a lot of people around the country that deal with social justice issues,” Walker said. “Trevecca has taught me a great lesson about being compassionate, thinking about people about where they are, not putting people in a box but understanding that everybody is different. I learned a lot of things at Trevecca that help me in my life and my job now.”

Walker’s career may have taken a bit of detour from music, but Walker hasn’t. He’s been a part of the Brooklyn Tabernacle Choir for 13 years. He believes he was meant to be in the choir, an idea that was beginning to form even as he worked on his senior project at Trevecca in the late 1990s.

“I have known about the choir my whole life.,” Walker said. “For my senior conductor project, I did a Brooklyn Tabernacle song. So, it was almost like it was meant to be that I would join the choir. Everything I learned at Trevecca set the foundation and prepared me for the choir.”

Walker offered a little advice to soon-to-be graduates about life and their future careers. He says he wants students to understand that life can be hard but also amazing. Walker stressed the importance of a having a growing relationship with God

“[Your life] might not go in the direction you think it will, but if you keep at it, and you stay faithful and let God lead you, then it will be the best thing,” Walker said. ”My journey was rocky, but I stayed faithful, and God has blessed me for it.”