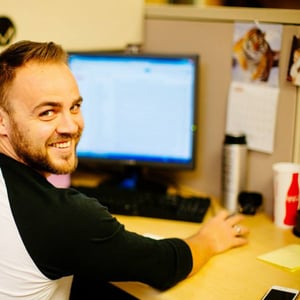 No matter what the degree, going back to school as an adult isn’t always easy. A full-time job, family time and finding time for all the amazing things that make your life special can be difficult to balance with homework, papers and reading assignments. But earning your degree is worth it.

It certainly has been for recent grad and current MBA student, Robert Catalano. He says that finishing his bachelor’s degree encouraged him to become a lifelong learner, ignited a passion for teaching and service and will help him build a resume so he can someday launch a nonprofit.

Recently, we talked with Catalano about his experience (read more) and what he’d say to adult students just starting their educational journey. Check out his advice!

“Time management becomes really important,” Catalano says. “Make sure you create time to give to not only your school work but the program itself.” For Catalano, actively working to schedule time for studying and doing homework—often a little more than might seem necessary—in addition to class time was vital to his success. “I wanted to commit to my classmates,” he says. “I didn’t want to go through the program in a blur and not know anyone, not do anything, just do my schoolwork and leave.”

At Trevecca, programs are taught using the cohort model, meaning groups of students progress through the entire program together, start to finish, one class at a time. For Catalano, that was a plus. As he put it, students should “commit” to their classmates. “So much of the program was community-based and I loved that,” he said. “We committed to bringing dinner every week as a class and sharing that meal. It wasn’t just you versus school; it was you and your team going through the program together. When it came time for group projects or homework or even life, we were able to tackle them as a team rather than going through those alone.”

In addition to his classmates, Catalano says his wife, his teachers and his employer were all key supporters as he worked toward completing his undergraduate degree and even now as he begins his master’s program. “[My wife] was an incredible support through this process,” he said. “If I had a paper to write or a project, she understood that came first. She came alongside and understood that there were times when I had to hit the books or write a paper.” Catalano’s employer was also supportive as were his teachers. “The teachers became part of the team,” he said. “Every time you’d go into a new class, you’d have a teacher who would become a part of the team that was supporting you.”

“Getting your undergraduate degree is in some ways about you proving to yourself that you can focus and do the work and focus,” Catalano says. “It might not be about getting A+ on everything.” That doesn’t mean that every concept will come easily or you’ll be naturally good at everything you do, he cautions, but each assignment will be an opportunity to learn and grow. “I’m not the best writer, but as I continued to just do the work and turn in papers, I turned in what I thought was great writing,” he says.

“I never thought I would graduate college, let alone go on to finish my master’s degree,” Catalano says. “Push into the idea that you’ll never stop learning.” While Catalano has embraced the idea of becoming a lifelong learner, he also knew that finishing his undergraduate degree would make a pay raise more likely and bring him closer to making his dream of teaching degree-completion students a reality. Finishing his degree and earning his master’s are also vital components in Catalano’s ultimate goal of running a nonprofit. Knowing why you’re pursuing the degree is important when it all seems a little overwhelming, Catalano says.

Taking the first step is easier than ever. Click below to learn more about our continuing studies programs.