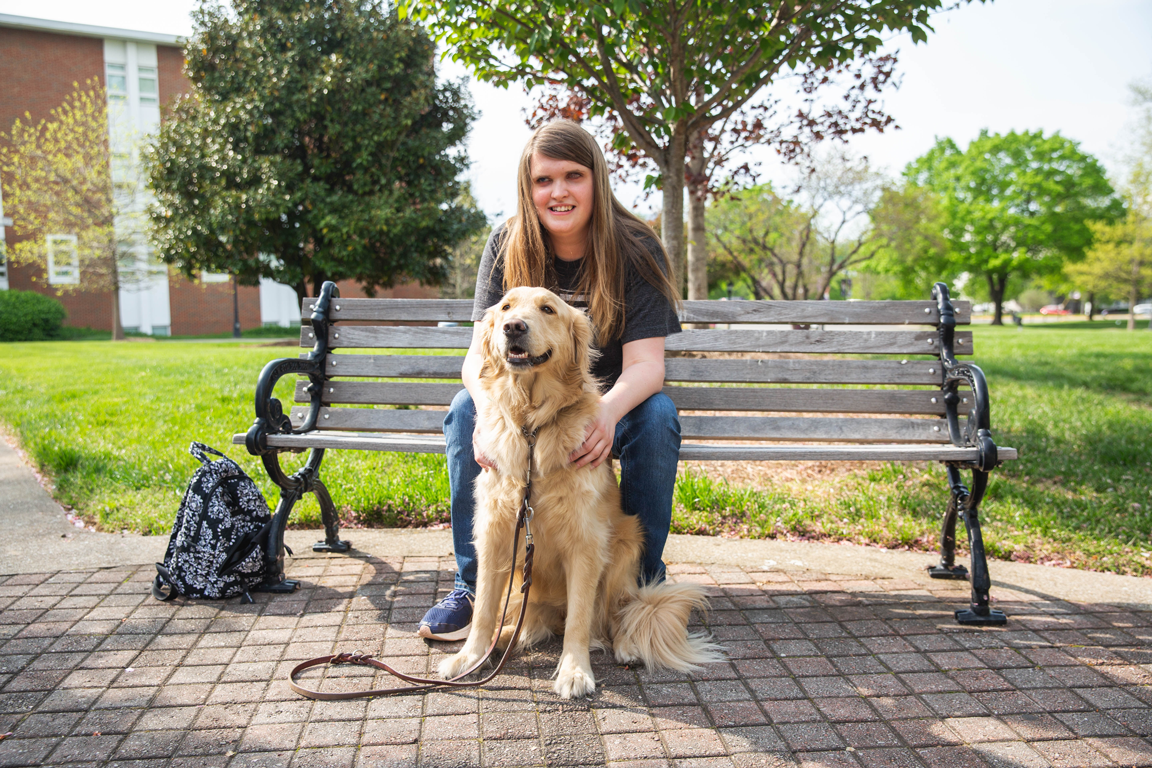 They’re sweet, cute, and a lot of fun to spot around campus, but there’s more to service animals than what you might think. For more information about service animals, we talked to Carrie Carlisle, a Trevecca student and owner of Jolette (who is rather famous around campus).

Here are some common misconceptions Carlisle says people often have about service animals and guide dogs:

Carlisle says that people sometimes think that working dogs are “slaves of some type” who don’t enjoy their work. “They love it, and the agencies wouldn’t put them through the program if they didn’t love their work,” Carlisle says. “They play with other dogs, and whenever the harness or the vest comes off, they get to play with toys and everything, just like a regular dog, and they get to interact with other people, just like other dogs.

2. You should never approach a dog (and the owner) while the dog is on duty.

It’s important to remember that when they’re working, a service dog’s first priority is his or her job, Carlisle cautions, but that doesn’t mean you have to completely ignore the dog or the owner. It’s always OK to approach the handler and ask questions, she says. “Just because the sign says, ‘Do not pet me; I’m working,’ that doesn’t mean that you can’t come up and talk to me,” Carlisle says.

3. Service animals are easy to attain.

Not quite true, Carlisle says. Getting a service animal can be a long process that takes time and effort. “It started in the fall of 2016, two weeks after my golden retriever [Muffin] that I had since first grade passed away,” Carlisle says. “You can’t just go and get a guide dog, there’s a process. I started out looking at different schools, there are several around the country…Agencies will help, so you just have to find one that’s suited to your needs.” Carlisle chose Guide Dogs for the Blind, a non-profit organization based out of San Rafael, Calif. “The reason why I picked this particular school was because I had friends that had gotten their guide dogs there, and I heard wonderful things about that place,” Carlisle says. “It was a long process because everything was booked in 2017. I was thankful that they said they could take me in 2018. Basically, I got the call several months later. I flew there, and the next day I met Jolette.

4. Most service animal companies charge a ridiculous amount of money.

Also not true, Carlisle says. “Everything there is provided for you,” she says. “When you go, your airfare is payed for, the dog is free and they pay for just about everything.”

5. Owners are accustomed to having a service animal after a while.

“It’s taken me a lot of time to get used to hearing ‘Hi, baby!’ or ‘Hi, puppy!’ from other people passing by,” Carlisle says. “I’ve learned that there’s some situations where you just got to let things go sometimes, because you’re never going to see this person again. Some people will try to pet her, despite the sign.”

6. There’s no difference between service animals and emotional support animals.

There is, Carlisle says. An emotional support animal a companion who provide comfort and therapeutic benefits to their handlers, but aren’t necessarily trained to perform specific tasks. Service animals like Jolette are. “Service dogs are there specifically, first and foremost, to guide, alert, and communicate with their handler. They’re not exactly pets. I mean Jolette, she is my pet, but I have to remember that she is first and foremost a service dog.”