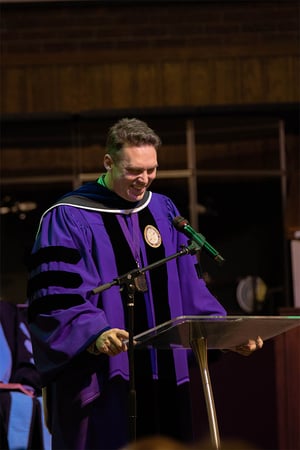 The text below is part one of a message presented at the undergraduate teaching excellence chapel, a celebration of Trevecca’s high standard of excellence in teaching.

There’s a cherished treasure in Christian higher education that is, I think, directly related to a prevalent problem facing modern people. First, an outline of the problem: a life of meaning and significance is lost on us. We are a people who have no problem setting goals, tackling issues, or getting things done. We just don’t really know why we’re doing most of this stuff.  Yes, many of us can point to some quick connection that quickly justifies what we’re doing. We get a job to make money. We make money to buy the things we want and need. We get a college education to be able to get the job that gets us everything I’ve just mentioned.

There’s nothing overtly wrong with anything I’ve just mentioned, but it rings a bit hollow in comparison with the gift that Christian higher education offers, so let me offer a description of that gift by appealing to a theological hero of mine. Augustine of Hippo was an unlikely saint on a quest for fulfillment through the achievement of lofty goals. His parents had high hopes for him, outpaced only by the even higher hopes he had for himself. On top of that, Augustine had the intellectual gifts to achieve everything he ever wanted. A top-of-the-class golden child, he set out on a quest to get the best education, the best job, and the girl of his dreams, and did exactly that, only to realize that none of it was satisfying to his heart.

Eventually, he came to an important realization: no finite thing was ever going to give his heart the satisfaction it craved. That doesn’t mean finite things are bad, only that they had limits, and every time he got one he wanted, it couldn’t quite quench his thirst for more. It was only the limitless beauty of God, he came to realize, that would offer him a field without border, a sea without floor, a sky without ceiling. “Our hearts are restless,” he would eventually come to confess to God, “until they find their rest in You.”

I get the sense that higher education in general is primed to perpetuate the restless heart syndrome. If nothing else, higher education is fueled by desire. We want the degree, the job, the relationship, the future possibilities, and so we enroll, driven by hopes for what might be.  Again, I don’t think there’s anything wrong with that. Every August, I get a front-row seat to incoming classes of students alongside their parents, driven with desires for the future, hearts on a quest to find something that will satisfy. Many of them have enrolled riding a type of futuristic promise that this college degree will be an effective pathway to getting everything they want. My persistent concern is that they’ll get everything they want out of their college experience, and still be left with a restless heart. They’ll get the scholarship, the job, the relationship, and find out ten years down the line that while none of it was bad, it was also no match for the limitless goodness of an infinite God.

The restless heart syndrome happens when we confuse the limited goods of life for things that can satisfy our longing hearts. When we try to infuse infinite worth in things that couldn’t possibly hold that kind of water, they’re going to burst the skins of expectations every time.  The joy of landing the job will eventually wear thin. The accomplishment at work will leave you longing for another one. Even that special relationship will finally reveal that the person you’ve found isn’t God, good as they are.

There’s tried-and-true wisdom in what Augustine eventually comes to recommend: use the finite goods of life – the college degree, the job, the relationship – as a way to enjoy the infinite goodness of God. Point your job toward something it can never be on its own. Make it a means of grace and come to discover the joy of a human life lived on mission for a purpose beyond itself. Aim the finite goods of life toward the infinite goodness of God and let your heart find a joyful home.