From the Archives: Trevecca Dining 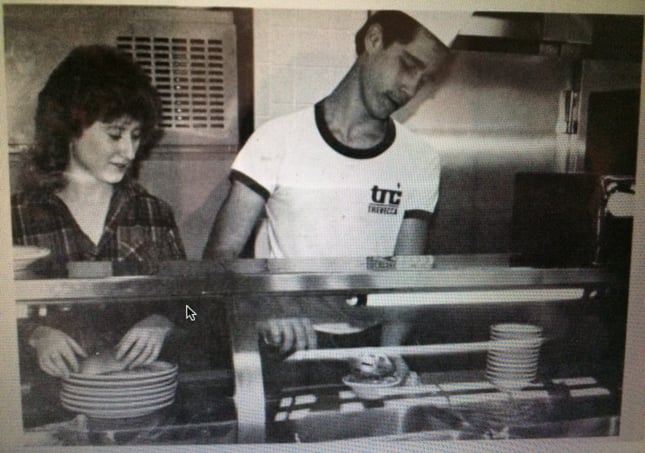 Over the years, Trevecca students have made many memories at Trevecca’s cafeteria. Since we just celebrated Thanksgiving last week, we remember the significance—both symbolic and literal—of coming to the table with friends and family. As students and faculty share life with one another around the table, friendships are made, and, sometimes, legends are born. Take the Great Tray Caper of 1999, for example, when students from Trevecca and Mount Vernon Nazarene University stole the trays from their respective cafeterias, met halfway, and swapped them.

Treveccans have always carried a sense of humor, even during tough times. Like in 1926 when the yearbook included a few “rules” for dining, like the one below, as a joke:

“Mrs. McClurkan,” it states, “does not object to certain foods being removed from the dining room provided the foods are hidden from the possible view of other girls. For instance, such delicacies as spinach, spaghetti, and sauerkraut might be carried out in the pockets.”

Dining has changed a lot over the years. Until the mid-60s, meals were purchased individually with cash. By the late 1960s, a meal plan cost $110 per quarter. This increased to $415 per quarter in 1980s, and costs have risen since.

One thing that has remained—and has been an essential part of Trevecca’s dining over the years—is Pioneer College Caterers, which has provided food services since the at Trevecca since the 1970s! Today’s students have many options, from the salad bar to the demo line and even some allergy-friendly options, but this was not always the case.

In Trevecca Folkore and Tradition, Homer Adams writes that, during the Great Depression, students “lived like poor people everywhere, eating simple but nourishing food.” For a time, students had to turn their plates over before being served to protect them from the soot in the air produced by the coal used in heating. Meat was rarely served, and a regular meal was made up of pinto beans, fried apples, greens, and vegetable soups. To feed the students, Trevecca administrators had to be creative and frugal. “Mother Mackey” gathered greens in the wild, bread was bought for a bargain price as “a day old,” and the present Benson Hall lot was a farm that produced food (and jobs) for the students.

Now, a young orchard grows behind Benson, and Trevecca’s urban farmers still occasionally provide vegetables for the cafeteria and sell canned goods, eggs, and vegetables at their farm stand on campus.

The dining hall was originally on the lower floor of McKay Hall, with a girls dorm located on the site of the present-day cafeteria. In 1954, after McKay caught fire, a new cafeteria was built that later doubled as a girl’s dorm and was called Bud Robinson Hall. This dining room was renovated to seat 250 people at long tables, creating a communal atmosphere.

By 1984, the Apple Dining Room in Jernigan became the new cafeteria and the lower floor of Bud Robinson became a snack shop and recreation area for students. When this building was gutted in 2008 and remodeled into what is today the Center for Leadership Calling and Purpose, all of the inner furnishings and equipment donated to Habitat for Humanity.

One of Trevecca’s deepest values over the years has been community. Not only have students shared meals with one another, but they have also shared meals with others in service. This season, let’s remember to be thankful for the opportunity to bless others and share life at the table.