When you think about the musical Seussical, a dark black stage isn’t exactly what pops you’re your mind, right? However, that was the scene that greeted me as I opened the door of the Benson Auditorium for one of the cast’s last rehearsals before opening night.

The space was teeming with energy as actors and tech filed into the room, slowly filling the air with noise and discussion. Some held plates of food from the cafeteria, while others glanced at their textbooks, taking a rare moment of downtime to focus on their school work.

I quietly set my backpack down in the back row and looked around the room to see if I recognized anyone. Scattered across my vision stood freshman and seniors—fresh faces and experienced faces. I soon recognized peers from numerous majors and classes. Although every student came from a varying field of study, there was no doubt that there was a shared love of theatre amongst them. As the time came for rehearsal to start, Dr. Jeff Frame, the director of the play and head of the Trevecca theatre program, calmed the bustle and gave directions for the night. 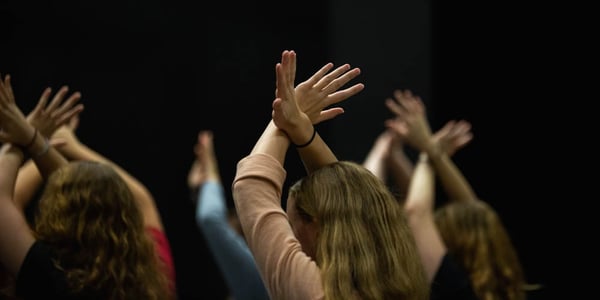 For this rehearsal, the cast was running through Act II—and suddenly, the dark stage was void no longer. Sounds of dialogue and music echoed through the performance hall as the stage lit up with a variety of characters. Some were seated on rolling platforms, while one towered above on stilts. My childhood memories flooded back as I watched the journey of each of Dr. Seuss’s most famous characters live their intertwined storylines.

An enormous amount of energy is required for every scene. One moment, I watched Bella Lopez, who plays the role of JoJo, leap around from platform to platform. The next, I witnessed the Cat in the Hat slink around the stage as he contemplated his future choices in a humorous and lively routine. I forgot about my upcoming midterms as I watched the actors put on gymnastic routines and belt out lively musical numbers.

As the cast and crew worked through the musical, they sought to improve each scene. They were busy the entire time, refreshing lines, learning new placements and polishing choreography. Even during the most difficult sections of rehearsal, the cast members’ spirits never fell. The talented cast—no matter the day they had or how they were feeling—strived for excellence.

Directed by Trevecca professor Dr. Jeff Frame and choreographed by Catherine Birdsong of the Nashville Children’s Theatre, Trevecca’s production of SEUSSICAL! will run October 25-27 at 7 p.m. and November 1-3 at 7 p.m. with a special afternoon matinee performance at 3 p.m. on Saturday, November 3. All performances run in Benson Theatre in McClurkan Hall on Trevecca’s campus. General admission tickets are $15, senior adults (age 65+) are $10 and children (age 10 and under) are $10. For Trevecca students with ID, tickets cost $5.